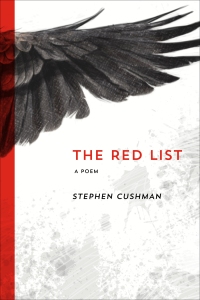 [To purchase, click HERE.]
.
The “red list” of Stephen Cushman’s new volume of poetry is the endangered species register, and the book begins and ends with the bald eagle, a bird that bounded back from the verge of extinction. The volume marks the inevitability of such changes, from danger to safety, from certainty to uncertainty, from joy to sadness and back again. In a single poem that advances through wordplay and association, Cushman meditates on subjects as vast as the earth’s fragile ecosystem and as small as the poet’s own deflated fantasy of self-importance: “There aren’t any jobs for more Jeremiahs.”
.
Simultaneously teasing the present and eulogizing what has been lost, Cushman speaks like a Shakespearean jester, freely and foolishly, but with penetrating insight.

“In this musical, magical voice, The Red List enchants readers with symphonic sound, and the substance simply becomes the lingering afterglow.” —Poetica-Place

In the 1830s Alexis de Tocqueville prophesied that American writers would slight, even despise,

form–that they would favor the sensational over rational order. He suggested that this attitude was linked to a distinct concept of democracy in America. Exposing the inaccuracies of such claims when applied to poetry, Stephen Cushman maintains that American poets tend to overvalue the formal aspects of their art and in turn overestimate the relationship between those formal aspects and various ideas of America. In this book Cushman examines poems and prose statements in which poets as diverse as Emily Dickinson and Ezra Pound describe their own poetic forms, and he investigates links and analogies between poets’ notions of form and their notions of “Americanness.”.

The book begins with a brief discussion of Whitman, who said, “The United States themselves are essentially the greatest poem.” Cushman takes this to mean that American poetry has succeeded in making fictions about itself which persuade its readers that its uniqueness transcends merely geographical boundaries. He explores the truth of this statement by considering the Americanness of Emily Dickinson, Ezra Pound, Elizabeth Bishop, and A. R. Ammons. He concludes that the uniqueness of American poetry lies not so much in its forms as in its formalism and in the various attitudes that formalism reveals.

“Cushman’s position is that major American poets have probably overvalued the formal and perhaps fallaciously have believed that the formal aspects of their poetry reflect deep-seated views of Americanness. The book is vital, new, offering the changing poetic view of America from 1855 to the present.”–Choice

“This book is valuable for its treatment of nationalism . . . , for its interpretation of individual poems, and for the striking, novel configurations among poets long thought opposed to one another. Fictions of Form in American Poetry is so well written it will delight and benefit the general reader as well as the specialist.”–Willard Spiegelman, Southern Methodist University

Stephen Cushman’s Riffraff embodies the spirit of its title, a Middle English word for “every particle” or “things of small value.” In this striking collection, scraps of the overlooked, and distasteful—a prostitute passed in the street, the speaker’s own forgotten dreams, toothless dogs rolling in deer offal—become occasions to meditate on the rich experiences from which we too often turn away.

The poems reflect on the possibilities of language, the natural world, politics, history, eros, aging, family, and spiritual devotion. Without pretension, Cushman values “adepts who can dwell in the kiosk of a kiss.” Skillfully, he transmutes his own curiosity and surprise into moments of shared instruction. “Keep low,” he whispers. “Stay put. / Learn from the leaves.” Riffraff culls what we have discarded, saves from abandonment the notions we have taken for granted, and, indeed, venerates every particle.

In the graceful lyrics of Stephen Cushman’s Heart Island, no heart is truly an island: all are interconnected.  The human and natural environments of Cushman’s world gather together in resonant and affectionate poems that nonetheless resist an easy nostalgia.   Structured around a sequence of poems to the individual months of the year, this book recalls the ancient genre of calendrical poetry at the same time that its attention to months  suggests an elegiac homage to patterns of weather, both inner and outer, and to the integrities of seasons that may not last much longer as the earth continues to warm.

“Stephen Cushman is a poet obsessed with the calendar. His poems mark time. Personal and historic anniversaries and other landmark passages (weddings, deaths, births, diurnal and nocturnal motions, the months—his collection Heart Island, for instance, takes as its backbone 12 poems apostrophizing each of the months of the zodiac—the seasons, ‘sacred’ thresholds of all sorts) provide the occasion for poetic musings that, though they may begin with noting or honoring a pattern in nature or human behavior, always move the reader into unexpected and provocative territory.”  Chronicle of Higher Education

In his second collection of poems, Stephen Cushman explores, appraises, and celebrates many different forms of connections —domestic, social, historical, and religious. With an easygoing voice, an engaging humor, and a sure understanding of his craft, he addresses subjects from marriage and travel to urbanism and the Civil War, illustrating the rewards of a sensitive regard for the junctions in everyday life and language.

Invoking “all the lessons they ever taught me / about ordination in the ordinary,” he reflects on members of his family, affirming attachments of marriage and blood. Beyond those immediate ties lie the connections of history—which take him to ancient Egypt, wartime Virginia, and Greece under Nazi occupation—as well as the broader bonds of struggling to love neighbors and strangers: a panhandler on a city street, an inmate in a county jail, a nun at a convent window, a fellow passenger in a subway car. In trying to make and maintain any of these links, Cushman avoids lapses of sentimental piety, admitting instead, in the words of the title poem, “I worship the sacred and savor the profane.”

Deftly balancing reverence and irreverence, the poems in Cussing Lesson both bless and curse. Whatever mode Cushman chooses and whatever form he employs, connections made by heart and head find their expression in his finely tuned confluence of words.

In the title poem of this impressive debut collection, Stephen Cushman speaks as much of his poetics as he does of his role as father to a young child: “I perform the offices of comfort / as best I can. . . . I put it all on the line / one piece at a time.” In many poems in this volume, Cushman puts himself on the line with respect to family life, focusing on a parent or grandparent, spouse or child. In others he roams freely among subjects, pausing along the way before photographs from the Civil War, an engraving of Envy, a newspaper clipping about two climbers frozen on a mountain, wolves in a zoo, a woman who directs airplanes in from a runway.

Whether about family, history, religion, travel, or the natural world, these poems blend the everyday with the visionary, combining attention to detail with larger uncertainties. No matter how far a poem may wander in geography or subject matter, sooner or later it returns to the work of performing the offices of comfort, sometimes triumphantly with joy or humor, sometimes reluctantly with an acknowledgment of incompleteness and insufficiency.

Finally, at a moment in the history of American poetry when partisans of formal and free verse view each other with mutual suspicion, Cushman’s poems demonstrate the pleasures and powers of treating the varieties of verse design as a poet’s rightful inheritance.

“Poetry may be more philosophical than history, but when the events of war or peace become poetry, as in Stephen Cushman’s poems, the impact doubles, the poems both generally and incidentally true.  Blue Pajamas brings us a major new voice and a major new range.” –A. R. Ammons

“Stephen Cushman is both profound in his concerns and exceptionally skilled in the subtlety and power of his verse.  Whether meditating on animals, the night sky, the matter of belief, or his own children, he writes true poetry, always moving beyond the literal.”   –John Hollander

War destroys, but it also inspires, stimulates, and creates. It is, in this way, a muse, and a powerful one at that. The American Civil War was a particularly prolific muse—unleashing with its violent realities a torrent of language, from soldiers’ intimate letters and diaries to everyday newspaper accounts, great speeches, and enduring literary works. In Belligerent Muse, Stephen Cushman considers the Civil War writings of five of the most significant and best known narrators of the conflict: Abraham Lincoln, Walt Whitman, William Tecumseh Sherman, Ambrose Bierce, and Joshua Lawrence Chamberlain. Considering their writings both as literary expressions and as efforts to record the rigors of the war, Cushman analyzes their narratives and the aesthetics underlying them to offer a richer understanding of how Civil War writing chronicled the events of the conflict as they unfolded and then served to frame the memory of the war afterward.

Elegantly interweaving military and literary history, Cushman uses some of the war’s most famous writers and their works to explore the profound ways in which our nation’s great conflict not only changed the lives of its combatants and chroniclers but also fundamentally transformed American letters.

“Stephen Cushman presents an excellent and thoroughly researched overview of a timely topic—the relation of the Civil War to the writings of men whose engagement both with fighting the war and with writing the war resonate with nineteenth century American culture.”—Shirley Samuels, Cornell University

Reflections on a Civil War Battle 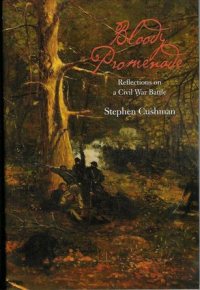 On 5 and 6 May 1864, the Union and Confederate armies met near an unfinished railroad in central Virginia, with Lee outmanned and outgunned, hoping to force Grant to fight in the woods. The name of the battle—Wilderness—suggests the horror of combat at close quarters and an inability to see the whole field of engagement, even from a distance. Indeed, the battle is remembered for its brutality and ultimate futility for Lee: even with 26,000 casualties on both sides, the Wilderness only briefly stemmed Grant’s advance.

Stephen Cushman lives fifty miles south of this battlefield. A poet and professor of American literature, he wrote Bloody Promenade to confront the fractured legacy of a battle that haunts him through its very proximity to his everyday life. Cushman’s personal narrative is not another history of the battle. “If this book is a history of anything,” he writes, “it’s the history of verbal and visual images of a single, particularly awful moment in the American Civil War.” Reflecting on that moment can begin in the present, with the latest film or reenactment, but it leads Cushman back to materials from the past. Writing in an informal, first-person style, he traces his own fascination with the conflict to a single book, a pictorial history he read as a boy. His abiding interest and poetic sensibility yield a fresh perspective on the war’s continuing grip on Americans—how it pervades our lives through films and songs; novels such as The Red Badge of Courage, The Killer Angels, and Cold Mountain; Whitman’s poetry and Winslow Homer’s painting; or the pull of the abstract idea of the triumph of freedom.

With maps and a brief discussion of the Battle of the Wilderness for those not familiar with the landscape and actors, Bloody Promenade provides a personal tour of one of the most savage engagements of the Civil War, then offers a lively discussion of its aftermath.

“Bloody Promenade grew out of one perceptive person’s nearly life-long attempt to understand the complex meanings of the Civil War. Ranging across a spacious landscape that embraces historic sites, memoirs by participants, works of fiction, and studies by historians, Stephen Cushman has written a contemplative book that should appeal to anyone interested in our great national crisis and why it continues to resonate among so many modern Americans.”—Gary W. Gallagher, University of Virginia